A blazing hat, a tattooed heart, he walks through the crowd alone
Today was going to be a good day, but now the sky is green
and everyone is speaking a new language

Whitebone orb over the merriment, his clothing reeks of sadness
Too late for the releasing of doves, or for happy farewells
when strangers wear blinders and greet shadows

The newest tattoo reads “poet,” which may as well read “isolation”
The simmering stew of vaguely familiar faces in plots of earth
waiting for burial, or arrival, or knowledge

These are the days of broken-down carnivals and fly-away balloons
The days when your face is not in the crowd, not anywhere at all
when sidewalks crack like spines, and eggs, and minds 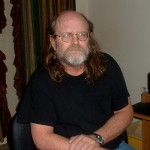 Ronald Ray is a poet and writer of short stories. He lives in a small apartment in Rockford, Illinois with a woman and a huge black cat, and writes at four AM. He has been known to bark on occasion. He self-publishes relentlessly, including several volumes of both poetry and literature, which most recently include “A Quiet Burning” and “I Sing Only Madness and Death.” Ron also has quite a few poems published through more traditional venues.