The hole is about four inches in diameter. It probably started its life as just a puncture in the thin sheet metal; someone then taking the time to bore it out larger and larger; a screwdriver working the metal, prying it apart with every ratcheting turn. The outside edges are wrapped in silver duct tape, although the silver isn’t quite so silver any more. Repeated use has left it dingy and gray. The tape is protection, a pitiful attempt to make it safe; delicate skin does despise a rough edge. The hole is hard to see, it isn’t something you would even notice if you weren’t looking for it; maybe in better light, but not as things are. A strip of fluorescent lights tells a sad love story, one must have recently died and in its grief, the other decided to give up the fight. It coughs and sputters, refusing to live on without its mate. This is when the alarms start to go off. A voice in the back of my mind screams for attention and panic sets in.

It had started with a joke. Most of the stupidest things in life do. Unlike many of my friends, I hadn’t had sex at prom. I hadn’t had sex before. I hadn’t had sex after. It was the summer of my twenty-second year in this stupid, backwater town in southern Ohio, and I still hadn’t even come close. Most of the people from school had married their sweethearts, latching on to their first taste of real pussy, and they rode it out. They had the house, the picket fence, and the two car garage. Kids started popping out, and others were soon on the way.

Insecure: not confident; lacking certainty; a general feeling of uneasiness or anxiety. This becomes me. The laughs had started behind my back, from people I had little to do with. Yet as time trudged on the laughing no longer needed to hide in the dark, my friends started to join in on the fun. A new joke started circulating around town, and I was the punch line.

My father didn’t help matters. Mr. Well-dressed himself with an outfit for every occasion and a penchant for shoes: red and black two-tone saddle shoes, alligator skin A-lines, cowboy boots in various colors and lengths, and the tennis shoes. He had a new pair every day for weeks on end. He stomped all over my sexuality with those damn shoes of his. He walked the lines that connected all the dots, with the answer being that I’m my father, minus the wife and kids of course. The new joke led to more discomfort, more insecurity. It festered and grew, boiled in my stomach, moved up my esophagus — psychology versus biology, in a showdown to prove which could cause me the most pain. I didn’t even try to meet girls anymore. There was no point, they all thought I was a cock-lover anyway.

The idea had come across the table at the local bar. My friends had all escaped their married lives for the night and had cooked up for me whatever the masculine form of a makeover was, if such a word even exists in the English language. It started with laughter, and that uneasy feeling that tended to crawl up from my stomach.

“Come on, Ian,” one of them called out as they noticed my discomfort. “You just need to get it out of you. It’s an unlucky streak — once you break it, everything will be fine.” He smiled a toothy smile, a having-sex-every-night smile.

“There are these places. They’re called dark spots. They’re all over the place,” another cut in, playing his part in a play made just for me. He spoke as if he’d rehearsed it. “The roadside rest stops. You know what I’m talking about?” Another smile, but this one was long and thin, his lips pursed together to hold back his laughter.

I did know what they were talking about. They were all over Ohio — little parks with a concrete block bathroom that held a couple stalls and a sink. They were like miniature interstate rest stops, but set on obscure two lane highways. When you passed one during the day and had to go, you held it in and prayed for a gas station.

More snickers, more stomach acid chewing away at my throat.

“Those are for faggots.” I responded in disgust, but I wasn’t sure if the fact that I knew this would come back to bite me in the ass or if it would fully exonerate me.

“You calling me gay?” Toothy smile asked, but he wasn’t smiling anymore.

“It doesn’t make you gay unless you’re the one doing it,” another burst out in a defensive tone, a tone that challenged me to think otherwise.

“A blow job’s a blow job,” Toothy added with an exuberant nod, as if to quell any misgivings I might have had. “Doesn’t matter who’s doing it.”

They may have been joking, it was hard to tell with them. But they had planted a seed. I mulled over the idea for weeks, the seed growing, branching out as I fixated on it. I lay awake at night, staring up at the darkness, going over the scenario in my head, until I could no longer just think about it. Until I was driving up US 23 fully intent on just letting the evening go where it dared.

I pulled off the highway into the rough dirt, and the battle that raged in my head slowly calmed. The only light came from a halogen lamp which emphasized the concrete block bathroom, snatching the building out of the absolute darkness that surrounded it. It seemed inviting and innocent as I stepped from my car and waited there, fully cloaked in the evening. I waited for something to happen, for police sirens, or God himself to come down and tell me to leave. But nothing happened. Nothing fueled my courage, and before I could stomach one more second of virginity, I had made my way into the tiny bathroom.

I now stand in one of the two bathroom stalls. I stand in the one that isn’t already latched; I know that the other houses someone I have never met and will never meet again, someone waiting for me. I stare at the four-inch hole wrapped in disgusting gray tape, trying not to imagine the number of people here before me. This is not what I expected. It is far from sterile. My mind at night had conjured up dreams of a hospital-clean setting with bright lights and even elevator music; a place so calm and serene you couldn’t help but lose yourself. I try to think of the reward, the break in my cycle. There is a hope that I can move on from this into a relationship that doesn’t involve bathroom stall walls, a hope that only a drilled out hole in the middle of nowhere could remedy. So with a voice in my head screaming “DON’T,” a rush of panic, and a body coursing with endorphins I undo my zipper and offer myself through the bathroom wall.

I feel something unimaginable. I’ve never felt anything like this before, so warm and inviting, so out of my control. I stand there until the muscles in my legs burn. I stand there swaying back and forth as my equilibrium takes a back seat to passion. The lightheadedness that comes on so quickly is because I forget to breathe. Breathe in. Breathe out. Breathe in. I have to keep on top of it or I’ll faint. I force myself to take breaths in between jarring waves of pleasure, but I forget all too quickly as I lose myself in the moment. The release is beyond comprehension. Out of my throat comes a noise I have never heard before. I stand there in utter disbelief. The stranger moves away, taking a seat on the toilet; the seat creaks under his weight. I remove myself from that glorious hole and zip my pants. I stand there awkwardly — does one thank the person on the other side, or do they slip back out into the night without a word? Deciding on the latter, I take a step towards the door.

I stumble. The light overhead flickers as I stare down at the soiled tiles and pieces of ripped toilet paper, searching for what had tripped me. Something is out of place. Something didn’t belong in all this filth. The shiny toe of a red and black two-toned saddle shoe pokes from underneath the adjoining stall. The room spins and my stomach goes into overtime, as the realization surges like a thousand volts through my brain. The acid crawls up my throat and out. It spews from my mouth and onto the all-too-familiar shoe before I can make it to the toilet. A well-known voice curses as the disembodied shoe kicks wildly at my leg.

“Stop!” I yell between heaves, head down in the toilet. “That fucking hurts!”

There is a brief moment before total recognition sinks in and the shoe goes limp.

Instantaneously the oxygen is sucked from the room, a lung-burning decompression, which brings a silence over the bathroom. However, the lack of air matters little; there is nothing to say between stall walls 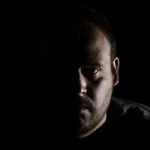 Aaron Z. Hawkins is a writer of short creative non-fiction and fiction. He currently lives with two college degrees and a cat, somewhere south of the Mason Dixon Line. Aaron’s work has appeared in the Menda City Review, Halfway Down the Stairs, Another 100 Horrors, and InfectiveINK.