The destroyer Nathan J Pipkin is rockin’ and rollin’ in the face of an oncoming typhoon as the top sergeant screams, “Hit the nets and give ’em hell, boys!”

I toss my foldin’ money overboard so’s I can double-cross bad luck, but watchin’ it flutter down to the sea makes me realize I’ll be stone-broke if’n I should happen to survive this day. My stomach was already tied up in knots enough, what with the impending assault on a strongly-fortified hunk of rock we’re about to make. The crash of the big guns is deafenin’ as salvo after salvo punishes our objective.

We make our way starboard and start descending the cargo net like a bunch of hypnotized green ants led by the Pied Piper himself. It won’t nare-a-bit this rough when we was practicin’ back in Hawaii, that’s fer sure.

“‘Bout time we got off this bucket of bolts!” my buddy Harper yells to me over the crescendo of cannon fire.

The pitching of the ship is such that even the toughest salts amongst us are woozy. Just as I stretch my foot out for the landing craft, two guys who have just gone over the railing above let loose simultaneously. Barf cascades on Harper and me like rotten hot oatmeal.

Our boat has a tank aboard—that’s why it’s called an LCT—and Harper and me are more’n happy to have that piece of De-troit-made machinery between us and the beach. We’ve both heard stories from those poor souls amongst us who went ashore at Tarawa, so, we ain’t gonna be hesitant to hide behind that iron until the bullets quit flyin’, believe you me.

LCT 1205 must have a crew more eager to discharge its load and get the hell back out from the beach, because it’s passing us. We wave at them guys, and they wave back, giving us the “thumbs up.” They get the “OK” sign in return.

“How’s your daddy?” one smartass yells at us, his hand cupped to his mouth.

The boys on the 1205 howl; some shake their heads as they laugh.

It feels just like a ferry ride to Cape Hatteras back home, on a rough sea, that is. So far, everything’s as calm as it could be, even with every portside gun of the supporting U.S. Navy flotilla blazin’ away from the five-inchers of the destroyers all the way up to the 16-inch shells fired from the long barrels of the indestructible battleship North Carolina, God love ‘er.

Not even a peep so far from the Japs. Maybe they’ve flown the coop like they done in the Aleutians. Surely they’d-a let loose by now if they was on that God-forsaken chunk of atoll. Wouldn’t give ya a plug nickel for the whole dang thing.

On we go; still no response. They must have bugged out. That’s a good thing for’em, too. Surely nothing could survive the battering that island’s being given, courtesy of my favorite Uncle Sam. So many palm fronds have been knocked loose that they practically cover the water. The coconuts bobbing amongst them look way too much like human heads to suit me, but it seems that the day of my reckoning for which I made out my last will and testament last night has been at least postponed. Whether it’s by the grace of God or by orders from the Japanese Imperial High Command don’t matter a whit. The prospect of livin’ through another day is mighty pleasin’, either way.

The landing ship that was next to us has taken a lead now and it looks like them fellers is gonna be easin’ under the shade of the few palm trees that remain standin’ long before we get relief from this a-cursed sun.

A huge swell comes up as we’re laughin’ with them fellers on the 1205. All of a dang sudden our LCT dips so far it seems we’re done for, but up she pops like a cork out of a fancy-pants’ champagne bottle.

“That weren’t good,” Harper says, getting no argument from me.

I nod, green as a row of Carolina collards back home in Pitt County. “Yeah, man. What a rollercoaster ride! That woulda cost ya two bits in New York City.”

Harper throws out that silly laugh of his and looks to port. His head cocks back.

I begin to point. “Right,” I start to say, but the word “there” don’t never leave my lips.

Not a single bullet yet fired in our direction and already the casualties have begun. Harper and me scan the waves, but no sign of them fellers ever comes to sight. The hubbub of small-talk stops.

My God! How quickly death comes, and for no reason a‘tall.

One minute them fellers was as happy as clams; the next, they was deader’n a doornail. Are we next? A shiver runs through me as I ponder how I’m gonna die this day. The boat pushes through the surf, and we realize we’re really gonna make it, seein’s there’s still nothing stirrin’ ashore. We’ll be the first to them coconuts after all. With so many trees shattered by our Navy boys, they’ll be a-plenty of ‘em on the ground to replenish our stomachs. I can almost taste that sweet coconut cake Mama always cooks for homecomin’ near Walstonburg at Mount Tabernacle Methodist. My tongue moistens my lips in anticipation of an unexpected treat.

I think I spot movement a couple hunnerd yards inland and point towards it.

“Say, Harper, ol’ buddy. Ya see somethin’ off to the right?”

“You gettin’ edgy’s all it is. We done all this worrying for nothin’.”

Most of us are skeptical that anything could survive this pounding. Surely they’d-a opened up on us by now. Even as the landing craft beaches not a peep is heard from the island.
“Let’s hit the beach and let’s hit it hard!” Sgt. Johnson yells.

The tank lurches forward, Sgt. Johnson shepherding us from the rear. So many gigantic potholes cover the landscape that it’s hard to believe anything could be left alive. But, dang! There’s a sand crab right in front of my face, actin’ as if it’s business as usual. Just don’t know no better, I guess.

All hell does break loose. Jap artillery explodes into action. Seems they got every grain of sand zeroed in. God help us all! The beach becomes a dying zone, body parts a-flyin’ through the air. A hand lands in front of me, a gold wedding band shinin’ in the sun. A woman has lost her man…a child its father?

Uncontrollable spasms seize me. Today might be my last day on Earth after all. Paw’s a tough old bird, but what’ll it do to my poor mama? Look how she went on and on when Aunt Rosa died, and she weren’t even Mama’s side of the family. I think about just burying myself, but the sarge says only those going forward will survive, and I love my mama too much to die this day.

Previously published in the Sleeping Cats Books’ anthology The Storm Is Coming. 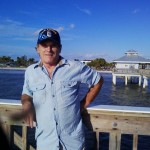 Tony Wayne Brown , who almost single-handedly held Castro and his Communist horde at bay during his four-year stint at Homestead AFB, Florida, his only weapon being an antique manual Remington typewriter that had no exclamation point (!), which seemed fitting since no events occurred that might require one. The mere possibility of capturing him and his drivels of words on paper was something that not even Castro could accept. Tony now lives back home in Greenville, NC. , where, as a tree surgeon, he thinks up story ideas while ninety feet up trees, then puts them to paper each night.