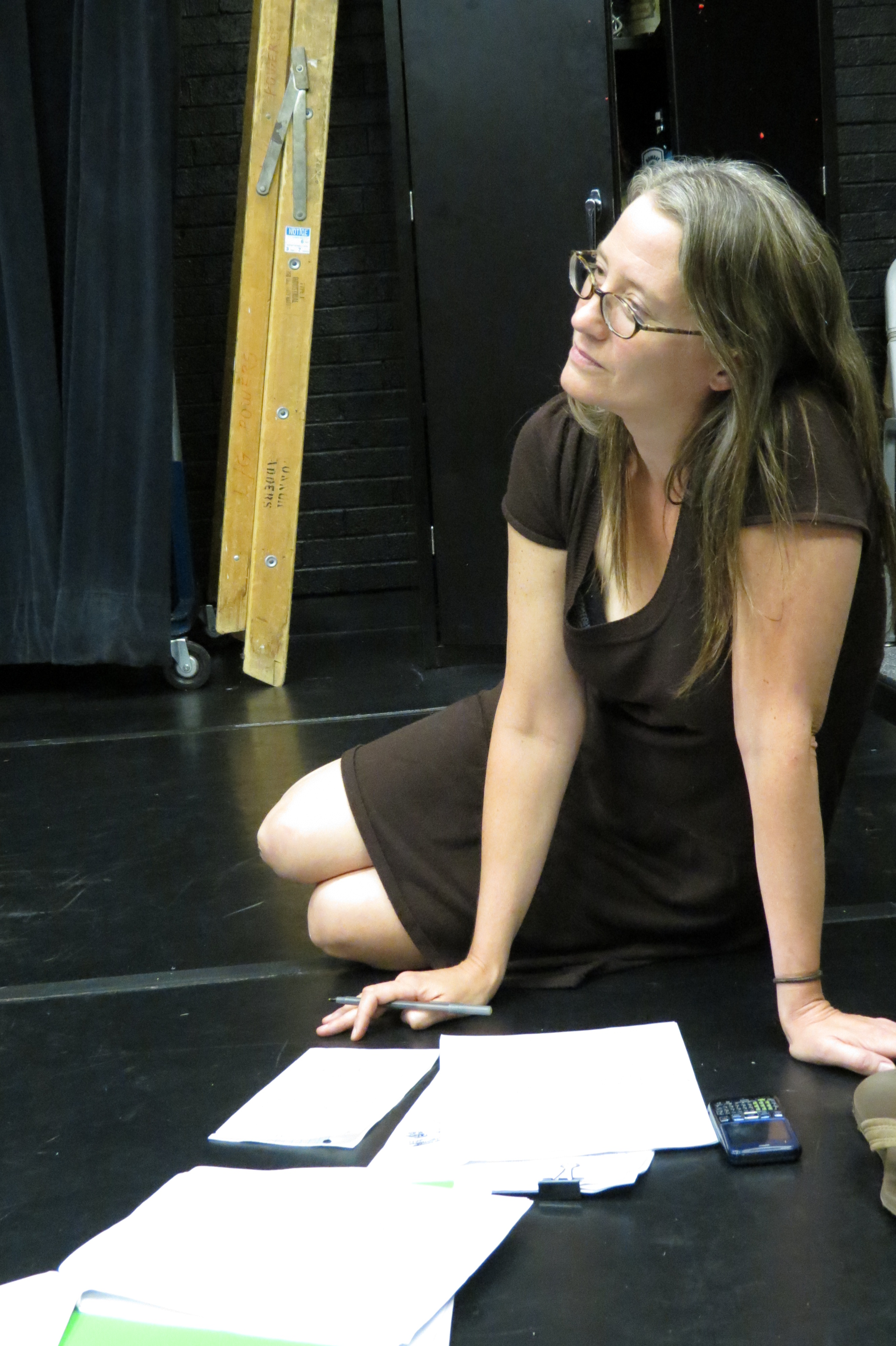 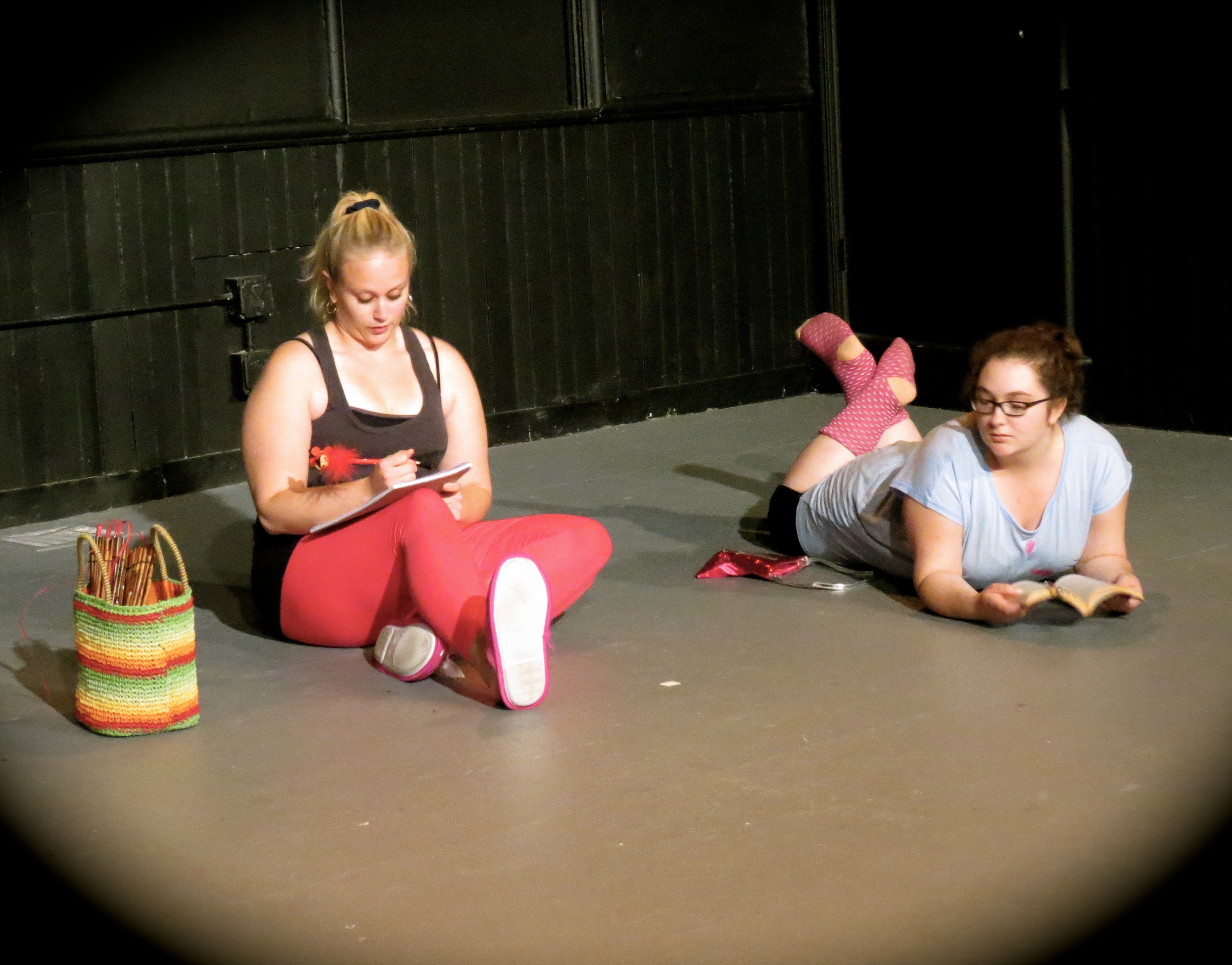 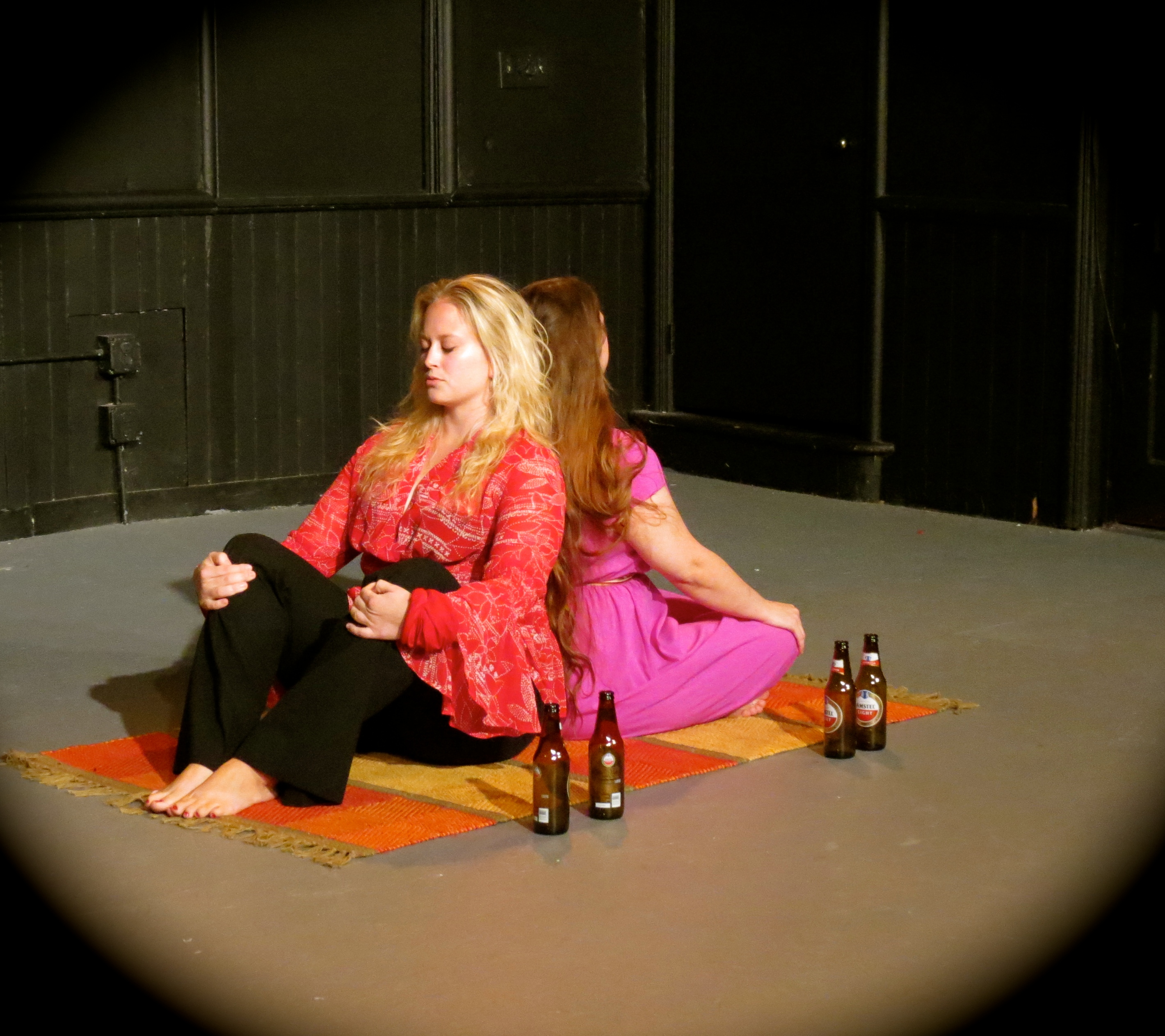 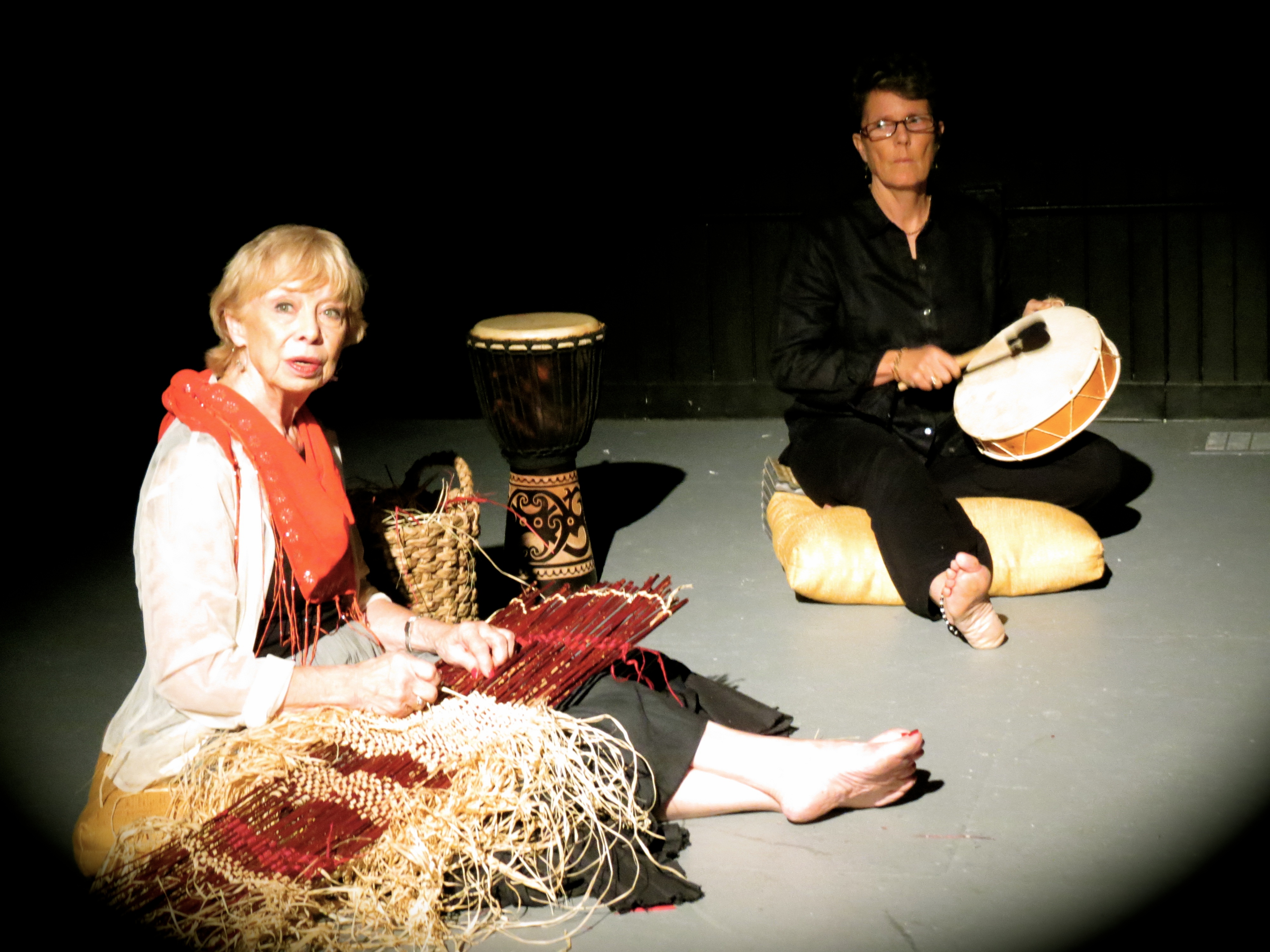 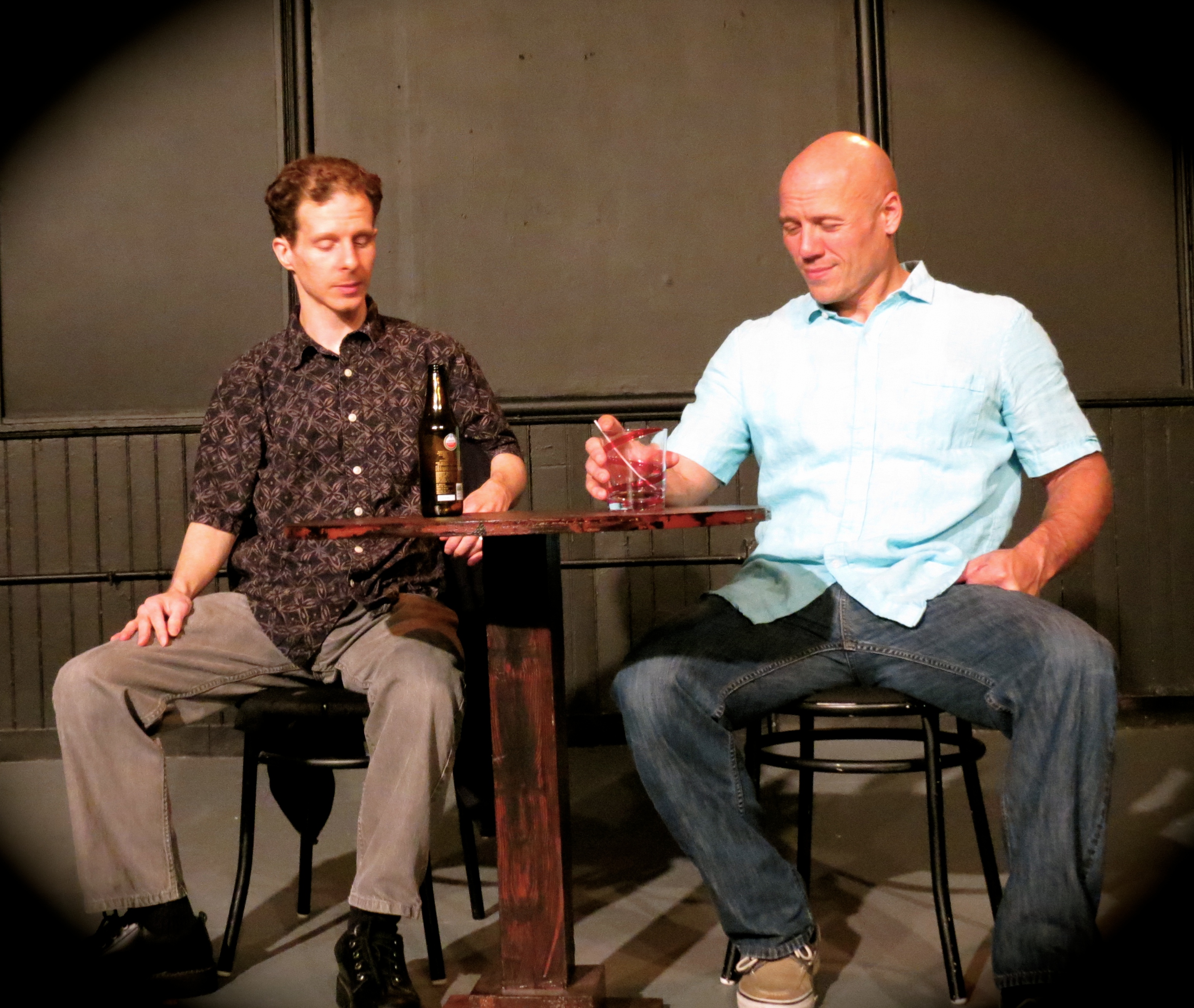 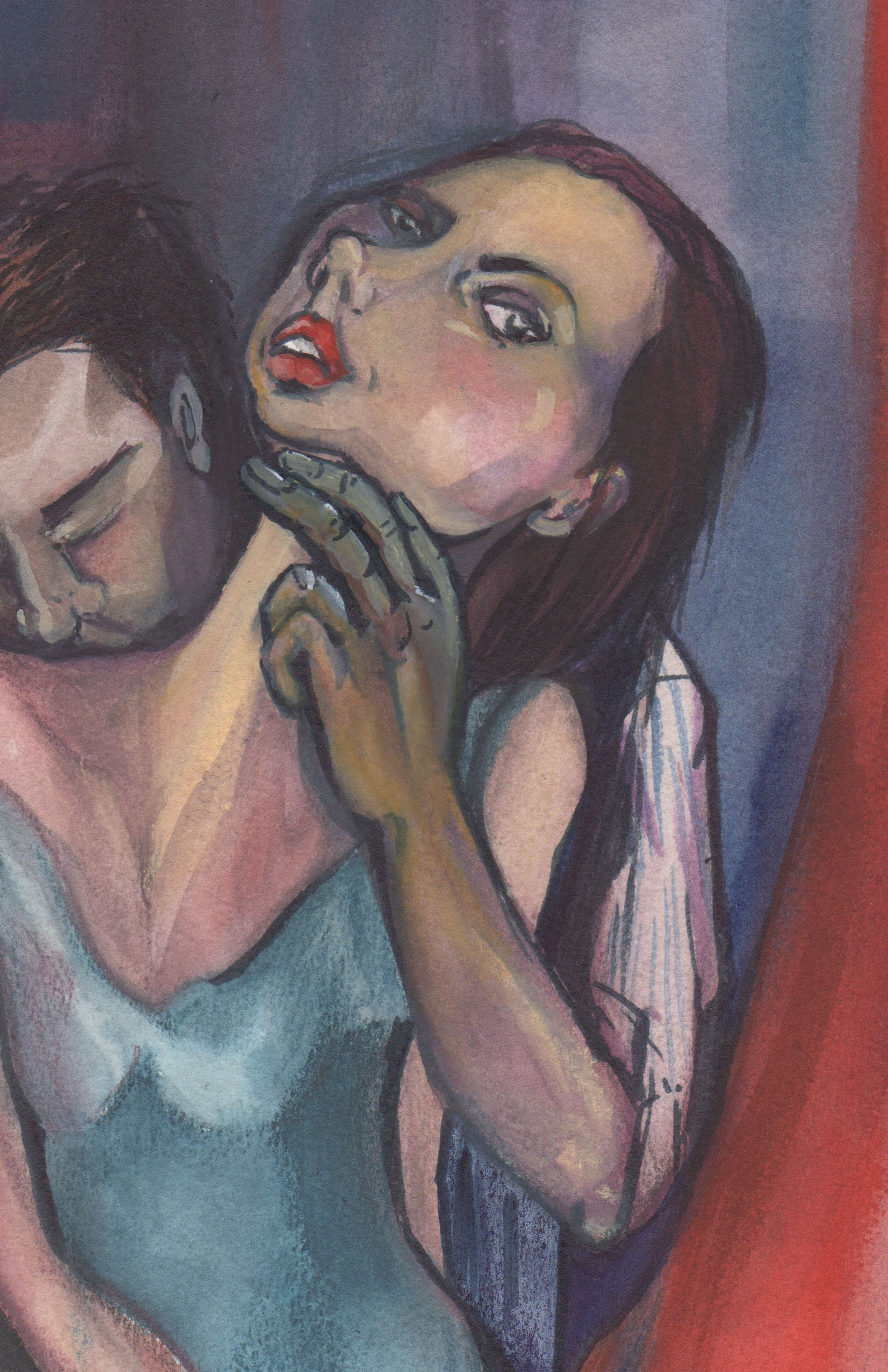 CHARACTERS
STORYTELLER: a woman, calm with a sagacious, quiet confidence. She wears a colorful costume. She is weaving. She sits rear stage left. A dim light remains on her throughout the evening.
DRUMMER
TRENT
JACKIE
CATE
NATALEE
BILL

NOTE ON DESIGN
The color red can/should be used with well-placed abandon.

TRENT
(TRENT turns toward her and sits up a little taller. He may at some point put his hands on her knees or her forearm, anywhere that hangs below the waist. He tries to act out the painting as he describes it) Yeah, it’s this image of a woman sitting on a chair and she looks like she’s asleep. Her head is leaning back. Her neck is long and her eyes are closed. She’s wearing red lipstick. Both of her hands are on her crotch. She could almost be smiling. And I think one nipple is exposed. There’s something about her that seems complex.

JACKIE:
I know that painting.

TRENT:
There’s also a penis in it.

JACKIE:
I don’t remember that part.

TRENT:
But it’s not obnoxious like Dali’s penis paintings. Something about the Picasso is beautiful—respectful in a way. Half of her is this beautifully sexual feminine being and the other half—just—is—all of us you know? (beat). (She smiles. He reaches out for her hand. She pulls back and takes a drink.).

JACKIE:
What I remember is The Dream is supposed to be a painting of Picasso’s very young mistress.He was cheating on his wife with some young girl.

TRENT:
Yes, but his representation of her seems—softer somehow.

JACKIE:
That’s exactly the kind of thing the speaker was talking about. Everybody sees this kind of behavior as acceptable. The speaker’s right, men do need to find ways to interrupt each other, make it uncool to objectify women.

TRENT:
You mean like not bringing up penises on a first date?

(Both laugh, there is sexual tension)

The Straw Mat Writers are: FourPlay contributor Angelique Stevens says about her play, “Broad Spectrum,” the first interwoven in the series: On their first date, Trent and Jackie argue the politics of sex while navigating the complexities of relationships.

Angelique’s non-fiction has been published in Shark Reef, Travelmag, and the anthology Not Somewhere Else But Here: A Contemporary Anthology of Women and Place. She has also published fiction in the anthology, Friend. Follow. Text: Stories from Living Online, which won the 2013 Silver award for Anthologies in Foreward Review. Her essay “Exposure” won the Silver in the Seventh Annual Traveler’s Tales’ “Best Women’s Travel Writing” category. Her most recent essay, “Labors of the Desert” is forthcoming in The Chattahoochee Review’s “Skin” Edition.

She teaches Creative Writing and Literature of Human Rights and Holocaust and Genocide at Monroe Community College in Rochester, New York. An activist for human rights, she has lived in Chiapas, Mexico, to be a witness for peace with the Zapatista Rebels; volunteered in an elephant refuge in Thailand; studied Holocaust education in Israel, writing in Paris; and observed the drilling of a water well in South Sudan. She is currently planning another two-month trip to South Sudan to evaluate the impact of water wells. She is a founding member of the writer’s circle, Straw Mat in Rochester, New York. FourPlay Contributor Maria Brandt says about her play “The Kiss,” the second interwoven in the series, that it’s “about friendship, sex, and secrets. In it, the strength of a relationship is tested when Cate reveals several secrets to Jackie.”

Maria Brandt is one of the four founding members of Straw Mat. Her short plays have been finalists at a number of festivals and produced in Boston and New York City. Most recently, her play The Cell was part of Geva Theatre Center’s Regional Writer’s Showcase. It is now being developed with Geva for a second reading in October. Her short story “Rain” was published in Rock & Sling: A Journal of Witness 9.1 (Spring/Summer 2014). And her short play “Litter” was just read in June as part of The Women Theatre Project’s Girl Play Festival in Fort Lauderdale.

Looking to the future, Maria’s short play “Speaking Through a Screen” will be published in the next InDigest. Out of Pocket Theatre Company is producing her New York Plays at MuCCC in October; and “Pragmatic Impulses:  Starting a Creative Writing Program at the Community College” will be published in the December 2014 issue of Teaching English at the Two-Year College. FourPlay Contributor Elizabeth Johnston says about her play “Practice,” the third interwoven in the series, that “Practice” involves a conversation between two homeschooled 16-year-old girls as they navigate the nuances of dating, romance, sex, and friendship.

Elizabeth’s poems have appeared in several literary journals, including Organs of Vision and Sense, The Muse: an International Journal of Poetry, Yellow Medicine Review, Trivia: Voices of Feminism, and The Journal of South Texas English Studies. Her scholarly work, which tends to focus on the role of women in popular culture, has also appeared in a number of academic journals and edited collections. Her most recent publications this past April include, “Signature” in Mom Egg Review, “Rest Stop” in New Verse News, and An Old Dog Teaches My Dog to Swim in cahoodaloodaling’s “The Animal Becomes Us” issue.

She teaches writing and gender studies courses at Monroe Community College and for the past seven years has facilitated writing workshops at the Breast Cancer Coalition of Rochester. She is currently engaged in the process of revising several poems and essays slated for publication in the Fall.  She lives with her husband, two daughters, and a menagerie of unruly animals in North Chili. FourPlay contributor Pam Emigh-Murphy says about her play Man Up, the fourth of the interwoven series: “Man Up challenges our notions of masculinity as characters Trent and Bill discuss sports, sex, divorce, and the influences of family.”

Her poetry has been nominated for the Pushcart Prize and selected for the Best of Vine Leaves Literary Journal 2013. Her creative non-fiction has been published in Little Patuxent Review, New Verse News, and The Voices Project. Her most recent essay, “Seized” was published in the Hippocampus Magazine. She has authored two articles published in The Alpenhorn, a national magazine publication for the Bernese Mountain Dog Club of America and recipient of the prestigious Maxwell Medallion Award from the Dog Writers Association of America. Read her most recent essay at hippocampus magazine.

For the past several years she has facilitated writing workshops for breast cancer survivors at the Breast Cancer Coalition of Rochester. She is a professor of English at Monroe Community College where she teaches literature and composition courses that explore the intersections of science and the humanities. She lives in Penfield, NY. More about the Straw Mat Writers