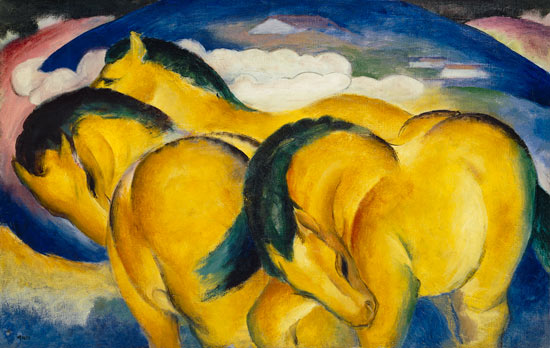 In the golden dew
of the dappling sun
little yellow horses
graze on yellow grass—
it is a morning
in October
and they know
the scent of autumn
winter on their heels
and they must move
to greener ground.

What struck me about this painting was its simplicity in creating an
image without pretension or embellishment. I tried to write the poems in the
same way.

Neil Ellman discovered his love and poetry and art while in high school. Because he fancied himself a poet, and quickly realized that the had no artistic talent whatsoever, he devoted himself to the literary arts. However, he did not write seriously for another forty years until after his retirement from a long career in public education. It was only then that he discovered a way to combine poetry and art, and it was only after that he discovered a word for it–ekphrasis. As a result, he has published more than 800 poems, more than 500 of which are ekphrastic, in print and online journals, anthologies and chapbooks throughout the world.