They say that opium never forgets you.
When I smelled the opium pipe in Chang Rai
amid wood phallic totems and a mountain tribe that never washed because they believed water would rob them of their power,
I knew that sweet burnt smell, as familiar as my body, as familiar as my voice, that smell I could not remember as an event, but knew.
Lovers-to-be seeing each other immediate
hand over hand out on the yardarm and letting go
into the South China Sea
human body like a nail being driven into a board
a mother first seeing her baby just pulled from her within
realization of a solution to a problem grappled
knowing in the Biblical way
being whipped in shame and anger by beloved father
red wine
crusty bread
garlic
olive oil
salt
brown rice
a sapphire
popping corn
a Luna moth
a laugh
a lyre
seven days
smoke
unbearable speed
entropy
gentle hands washing hair
the milk weed pod cracks open when it is ready and
seeds enter wind they have never known
this intoxicating world. 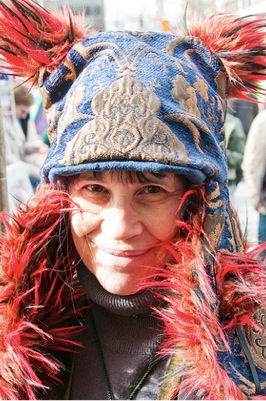 Charlotte Hart has shown visual art at the Smithsonian American Art Museum in Washington D.C., the New York National Academy of Design, and, her work is in the permanent collection of the Art Institute of Chicago. Her illustrations have accompanied titles published by Simon and Schuster. Her show of art and poetry, Lebendige Linien (Living Lines) was shown at Kunst-und Literaturwerkstatt – Studio im Hochhaus in Berlin, Germany.

Her poem, Clark Street Beach, is imprinted in concrete in front of the public library in Evanston, Illinois.