… and couched on navy blue,
you embroider classroom scenes:
Ravyn’s shove provoking Eric’s tears;
the strategy that sparked Nazir
to hand his homework in;
Najma’s shy half-smile beneath her yellow scarf.

Arm-chaired in green,
I counter same with the mundane:
battles
with relentless weeds,
a reluctant poem,
the obstinate recipe.

You expand, I truncate
across the Persian rug
where Passion curls at our feet
and opens one accusing eye.
It’s come to this? she sulks.

Where’s the tantalize?
What did you always say about the ache
in hotel rooms? The wild returns
that stripped your bed of everything?
What did you say?

The oven says it’s time for settling in –
fixed plates, TV on, I love you sealed
by almost-touching fingertips.
It’s come to this? Passion yawns, rearranging
dusty limbs, dissolving into sleep. 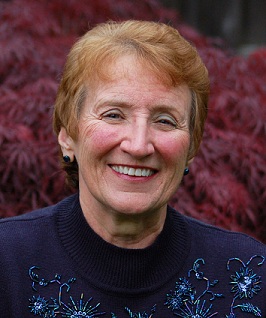 Carolyn Martin prides herself in getting poor grades in elementary school composition and in not writing one line of poetry until her late twenties. Now on the down slope of her sixth decade, she loves retirement and participating in the creative communities that flourish in Portland, OR. Her first collection of poems, Finding Compass, appeared in July 2011 and ensured she wouldn’t lose its 42 poems in her computer. She is currently president of the board of VoiceCatcher, a non-profit community that connects women writers and artists in the Portland area. She’s learning how to be an editor as well as a poet since this organization publishes a weblog and an online literary/art journal. Although she has a Ph.D. in English, she still can’t decide where commas go in much of creative writing.