After a life of silence
Your voice comes unexpectedly
No Chapman’s Homer, but
Bear cubs dancing, soft and innocent
All the December I know
Melts into May Day bouquets
Invented memories far away
Silver storm swallowed into safety
As if two-dimensional struggle means much less
In this new ember-turned-flame three-dimensional world 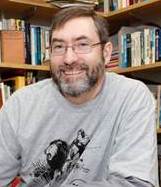 Stan Galloway, nominated Best of the Net in 2011 and 2012, teaches English at Bridgewater College, nestled in the Shenandoah Valley of Virginia. His chapbook Abraham is available from Sierra Delta Press. His full collection Just Married is forthcoming from unbound CONTENT. He has also written a book of literary criticism, The Teenage Tarzan (McFarland, 2010), which has led some people to say that he is a bit obsessed with the work of Edgar Rice Burroughs. He is also very huggable.