Summer days hunched over her garden
mother’s back was deeply tanned.
Alternating tops of outdated two-piece swimsuits
eliminated any evidence of her whiteness.
Her front needed no attention. Sun kissed,
lazing by the bay, conversing with peers,
her children wandered unattended along the beach.

I know every curve, twenty-five bones form
her spine, each protrusion rippling under
her over baked skin. Did she secretly crave
that darkness she outwardly feared? Question
answered when I was twenty-two. Drunk,
she asked to touch my lover’s hair.
Did it feel like brillo, mother?

Dried up breasts, she gave up on my brother.
She failed to offer nourishment to
her suckling daughter. Photos reveal
parties with crying children. Me pouting
in my fancy dress, legs flailing, hat askew,
turned from a candlelit cake to satisfy the Polaroid.

I cannot remember her young face.
Recollections of aluminum foil rabbit ears,
33’s spinning on a pressboard record player,
my brothers and I hid under racks of dresses
as she slid in and out of the dressing room
at the Rainbow Ranch or the Suburban Set.

If her back had been my carrier like a third world
stroller, might I see the world differently today?
Would her visions be mine? Could I have learned
the worth of my effort instead of her fear and
loathing? A deep rooted dissatisfaction
and an enormous need to be loved
could have skipped descending generations.

My infants were strapped to my breast.
My heart beat on their cheeks. My smile
shone brightly in their eyes. As toddlers
they rode on their father’s back. Were
my efforts enough to make the difference? 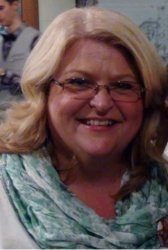