You have read all the stories about Captain Dagger
and his trusty sidekick, Switchblade.

Except for the sharpened carapace
he is more like you than most would believe.

When the sinister Mr. Machete
gets the drop on our heroes with his flying guillotine,
you know two pages in advance
that the only thing needed is a temporary
reversal of gravity to save the day.

A localized distortion of common physics causes
your water clock to be off by exactly twenty-four hours.

In the early stories, The Captain is a roguish sort,
who gets all the girls you want him to get
while many subtle references
regarding his ample endowment are made.

You’ve done the math, and sadly admit you could never
come close to measuring up to that degree of manliness.

To become a true hero in his own right,
the later stories send Switchblade off to Mongolia
to train with The Desert Ghost Warriors and become
an initiate of a mysterious fighting style
that has no defense in the western world.
Surprisingly, his newly acquired Fe-ng de Quántóu method
is met with resistance on more than one occasion.

Switchblade’s minor failings help you to cope
after you’ve flooded your apartment with bathwater.

Meanwhile, The Captain has a couple of undertakings
of his own which go poorly.
In The Adventure of the Hermit’s Cave, our hero
is hypnotized and nearly made to walk into a bottomless pit.

You were hardly surprised to learn that The Captain
was only pretending to be under the control
of the Dark Hermit of Abyssinia.
It seems that chrome-plated armor
is a natural insulator against suggestion and mind control.

You take measures to ensure a lifetime of independent thought.

It was also a little disappointing to discover that the Captain
was to find his one true love
held captive in a small alcove of the hermit’s cave.

The Captain swore off his indiscreet ways
and would stay true to his girl Ruby until his final days.
Even when Switchblade returned to The Captain’s side,
things would never be the same.

You got the autographs of Ward West and Burt Adams,
the original Captain Dagger and Switchblade,
at a comic convention. Strangely, not many people
seemed interested in their golden-age booth.

The saga of our heroes comes to an end when
Ruby gives birth to a son named Dirk,
and the Captain, now calling himself Douglass Dodgson,
retires his indestructible body armor to become a family man.

You know that Dirk Dodgson grows up to become the chronicler
of the stories you so dearly cherish. This ending was inevitable,
but it still seems heartbreaking and unfair.

Switchblade could never give up the old life.
You imagine him sometimes, atop buildings at night,
blending with shadows, striking dynamic poses,
hoping someone will remember him as the hero
he once was, or at least had hoped to be.

Your own story has ended as well.
When the landlord’s crew comes to clean out your apartment,
there is no context for understanding.
They briefly try on the strangely insulated helmet and suit
you constructed and wore for most of each day.

Without you, your treasure has become garbage
to be buried in the earth forever
and the pulp lives of Captain Dagger and Switchblade
are enshrined in the same casket as their last devoted fan. 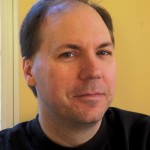 Richard King Perkins II is a state-sponsored advocate for residents in long-term care facilities. He has a wife, Vickie, and a daughter, Sage. His work has appeared in hundreds of publications including Prime Mincer, Sheepshead Review, Sierra Nevada Review, Fox Cry, Two Thirds North and The Red Cedar Review. He has work forthcoming in Bluestem, Poetry Salzburg Review and The William and Mary Review.