The summer heat shimmies off the roof of the squat grey building. A small placard on the door reads “Mary Lamb Employment Agency.” Inside, I’m intercepted by a big blonde in a denim dress and cowboy boots.

I laugh. She doesn’t. I sit. She flips her dry curls from one shoulder to the other.

I nod. The job posting read: “Wanted: Caretaker. Nightshift. Animal husbandry. Travel required.” I’m 35. There’s no one to make dinner for, even if I could afford dinner. Which I can’t. Which is why Rufus left months ago, saying he couldn’t ‘do this anymore.’ Now I can’t do it either: sit at home dreaming about the kids we’ll never adopt, trips we’ll never take, and goals we’ll never realize. I barely care what the job is, as long as it keeps this insistent ache at bay.

“So, Felix, what are your qualifications for this position?”

“I did my undergrad in biology and my masters in sociology. Not exactly a caretaker, but I’m pretty sure I’m up for it.” I wink at her.

“You think so, do you? Tell me about your previous job.” Her office smells a little like manure, though her boots look clean.

“I’ve been out of work for awhile, but before that research.”

“Hmph,” she says. I smile, hoping the freckled hide around her eyes will ease a bit. It doesn’t. “Got any experience with cats?”

“I do have a cat.” I can’t see what this has to do with anything, but I’ll play ball. “His name is Buster. He’s orange and he likes catnip and La-Z-Boys.” Buster dislikes the cheap food I’ve been giving him. He probably wishes he’d gone with Rufus. I leave that part out.

Mary sits upright. “Can he fiddle?”

“You think this is funny?” she asks. I shake my head. Bizarre, but not funny. “What about dogs?”

“I have a bulldog. Winston. He sleeps a lot.”

Mary’s mouth morphs from a thin line to a series of accordion creases. She breaks her pencil scribbling something in my file. “Any experience with cows? Plates? Silverware?”

“I’ve eaten quite a few cows on plates with silverware.” I imagine telling Rufus what a big mistake I’ve made. I imagine my empty apartment. The ache rolls up my chest into my throat.

“You humans,” she says. “Everything is a joke to you.”

Mary sidles to the window behind her desk, pulling the miniblind cord with a flourish. Outside, a chartreuse hill is dotted with black and white sheep. This is not possible, though, because this window should face the Sawyer Cafe — a place I no longer visit because the way the waitress looks at me when I say “table for one” and pay in quarters.

“Who helps the cows jump over the moon?”

“The cows don’t jump over the moon. It’s just a story.”

“I suppose you’re gonna tell me that I’m just a story too.”

This isn’t getting us anywhere. I stand, offer my hand. “Thanks,” I say. “This has been … entertaining.”

“What about my sheep?” Her face is equal parts anguished and disgusted.

“Fine.” I sit back down. Either Mary is telling the truth or she has an admirable commitment to her prank. “What happened to my predecessor?”

“He quit. Moved to Norwich.”

“He missed the food.”

Maybe crazy was exactly what I needed. What did I have to lose? I took a breath. “I’ll take it.”

That afternoon, Mary and I load Buster, Winston, and my cutlery into a silver airstream attached to an ancient, matching Cadillac. Like the Men In the Moon before me, I supply my own cat and dog and tablewares. Without Rufus around, I have an excess of dishes.

We roll through the city, humid and humming, to the outskirts of town. The first fireflies are blinking on the edges of the cornfields, celebrating the setting sun. The chewing Holsteins watch us gather speed. I wonder if they know we’ll meet again sometime, somewhere else, on a night they decide to take a chance, just like me. I’ll intercept them on their way past, give them some dinner, and correct their trajectory home.

I’m lulled to sleep by the scent of green fields and cooler air. When I wake up, I am still in the passenger seat of the Cadillac. The ebony sky and colorless sand is perfect and still. The airstream has morphed into a silvery palace erupting from a moon crater. On the steps, Winston laughs as Buster accompanies a group of dancing spoons.

“You’ve got old friends and new friends.” She sounds incredulous. “Same as before.”

A festive tableau surrounds us. There’s a dog in a space suit trotting up from over the rise and music from several directions. A group of people beckon, raising glasses of champagne at me from the gazebo of my new home. Instinctively, I grab for Rufus’ hand as I look at the earth, distant and silent. I didn’t say goodbye. I brace for the ache again, but it doesn’t come. I start to bound toward the party when I remember I haven’t said goodbye to Mary.

“Why did you pick me?” My eyes hurt — I can’t tell if it’s the contrast of the light or because I’m feeling every emotion at once.

She smiles to herself as she returns the key to the ignition. “Felix, honey, lonely is a choice. All you had to do is look up.” 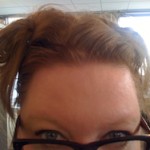 Camille Griep lives and writes north of Seattle, Washington. Her work has been featured in online and print journals such as The Lascaux Review, The First Line, and Treehouse, among others, and is forthcoming in the genre anthologies Blaze of Glory (Song Story Press) and Witches, Stitches, & Bitches (Evil Girlfriend Media). When she’s not hard at work on her obligatory first novel, she can be found feeding neighborhood cats masquerading as strays, conquering her fear of car washes, and customizing perfectly good recipes.